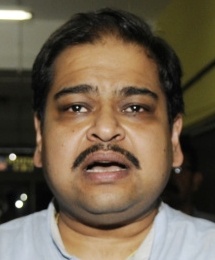 Bose was arrested after some six hours of questioning by CBI officials in Kolkata.

Another TMC leader, West Bengal transport minister Madan Mitra, who was also summoned by the CBI today, did not appear before the investigating agency citing ''poor health''.

Hours after receiving the summons on Wednesday evening, Mitra was admitted to a private hospital. Later he moved to the government-run SSKM Hospital in Kolkata.

Former TMC MP and now Congress leader, Somen Mitra, who was also summoned, appeared before the investigating agency in the afternoon.

Besides the CBI, the Enforcement Directorate as well as the Serious Fraud Investigation Office (SFIO) had earlier grilled Srinjoy Bose, which too have been probing the scam.

The CBI decided to take Bose into custody for his "prima facie involvement in the case", officials said.

Bose was arrested on allegations of criminal conspiracy, misappropriation of funds and deriving undue financial benefits in the case related to Saradha Realty.

Rajya Sabha chairman Hamid Ansari has been informed about the arrest of a House MP as per procedure. He will be produced in a local court on Saturday.

Kunal Ghosh, before being arrested by West Bengal police last year in connection with Saradha, in a 36-minute video broadcast on a local Bengali channel last year had named Bose along with several other TMC leaders as complicit in the Saradha scam.

Be it Sudipta Sen's purported letter to CBI last year or Kunal Ghosh's public comments before being arrested, the names of many TMC leaders like Mukul Roy, Madan Mitra or Srinjoy Bose have often surfaced in connection with the scam.

Opposition parties, including the Left alliance, the Congress and the BJP, reacted saying the arrest was expected.

On 9 May, a division bench of the Kolkata High Court directed the CBI to probe the operations of the deposit-taking firms in West Bengal and Odisha, including Saradha, which sunk in April 2013. The court had specifically asked the CBI look into larger conspiracy angles.