The Supreme Court today granted bail for former Tamil Nadu chief minister J Jayalalithaa, three weeks after she was sentenced to a four-year jail by a Karnataka court in a case related to owning assets disproportionate to her known income. 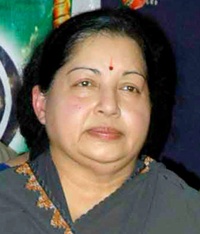 The apex court also suspended her sentence of four-year jail term till the pendency of her appeal.

In her bail plea, Jayalalithaa had also invoked section 389 of the Code of Criminal Procedure seeking suspension of her sentence and granting of bail till the pendency of her appeal against the trial court conviction.

She was granted bail after she gave the apex court an assurance that she would not seek any adjournment of her appeals case in the high court, and would file a paperbook of her appeal within 2 months.

"We will not give you a day more if you fail to file the paperbook within 2 months", the Supreme Court told her.

The apex court had also directed the Karnatala High Court to pronounce a verdict in the case within three months.

Jayalalithaa also agreed to the court's directive that since she sought bail on grounds of ill health she would remain within the confines of her house for two - three months.

Jayalalithaa  has been barred from moving out of her home or receiving any visitors.

The court also asked her to direct her party workers not to create a law and order problem in the state.

Jayalalithaa was convicted in a complaint filed by Subramanian Swamy in a Chennai court in 1996.

It was alleged that the value of Jayalalithaa's assets increased to Rs66.65 crore when she demitted office in 1996 after a five-year stint. Before assuming office as chief minister on 1 July 1991, the value of her assets was Rs2.01 crore, it was alleged.

Jayalalithaa had then declared that she was drawing only Re1 as salary.

It was the lavish wedding of her foster son Sudhakaran in 1995 that undid her. The extravagance at the wedding led to suspicions about the former chief minister having vast unaccounted wealth.

While Jayalalithaa was the first accused in the case, her one-time aide Sasikala, her erstwhile foster son V N Sudhakaran and J Ilavarasi, a relative of Sasikala, are the other accused.

The case that opened 18 years ago, has seen many petitions filed by the accused involving questions, including that of law, procedures and relief in several courts like the trial court, high courts of Madras and Karnataka and the Supreme Court.

Swamy who filed the case in a trial court in Tamil Nadu, later petitioned for the case to be moved to Karnataka, claiming it would not get a fair hearing in Tamil Nadu where Jayalalithaa was in power.