Jayalalithaa to spend another week in jail as bail hearing deferred 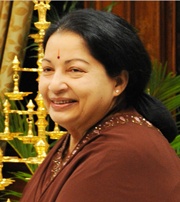 Tamil Nadu's disqualified ex-Chief Minister J Jayalalithaa will have to spend at least another six days in a Bangalore jail, with the Karnataka High Court posting further hearing of her bail petition to 7 October.

Represented by noted lawyer Ram Jethmalani, Jayalalithaa has been in a Bangalore prison since Saturday, after a trial court outside her state found guilty of holding assets disproportionate to her known sources of income.

Her conviction automatically disqualifies her from continuing as chief minister or even as an ordinary member of the state assembly under a recent Supreme Court precedent. Her loyal aide O Panneerselvam, 63, took over as chief minister of Tamil Nadu on Monday, breaking down in tears as he took the oath of office.

Caustic commentators say the Tamil Nadu government is now being run from a jail in Karnataka.

Jayalalithaa's All India Anna Dravida Munnetra Kazhagam (AIADMK) swept the Tamil Nadu elections in May this year; it is also the third-largest party in the Lok Sabha.

Jayalalithaa (66) was in the middle of her third term as Tamil Nadu Chief Minister when she was convicted of corruption in a case that has dragged on for 18 years. She says the charges against her are politically motivated.

She is probably right in the latter statement, because if the 'disproportionate assets' cruteruib is applied universally, at least half of India's lawmakers – many of them in ruling positions – should be sharing her fate.

Showing the support that the former film star enjoys in her home state, actors, directors and others from the film industry in Tamil Nadu are on a hunger strike in Chennai to protest against her arrest. Cinemas in Chennai were shut till 6 pm on Tuesday.

Jayalalithaa is Prisoner No 7402 in Bangalore's Central Prison. Her trial was transferred to the Karnataka capital in 2001 to ensure impartiality.

Tamil Nadu votes for its next government in 2016. Unless Jayalalithaa's conviction is overturned by a higher court, she will not be able to contest the election.