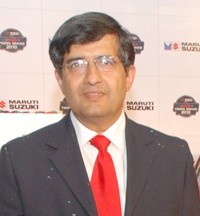 Often seen by automotive industry watchers as the face of Maruti Suzuki, Pareek has seen the time when its market share peaked to its highest for the past five years.

No reasons were given, but he is expected to reveal his plans shortly, which would be connected with the automobile industry. Unconfirmed reports say that he might be headed for rival carmaker Tata Motors.

Rumours of Pareek's resignation were doing the rounds earlier this year at the Delhi Auto Expo as well, but it was vehemently denied by the company then.

In recent months, Maruti Suzuki has seen a major revamp of the senior management, with Suzuki Motor Corp tightening its hold on several critical functions such as human resources. The revamp in April 2014 saw three senior chief operating officers being asked to share responsibilities with Suzuki expatriates.

Pareek is credited with spearheading Maruti's drive into the rural markets and the success of several company products.