Prime Minister Narendra Modi today showed his skills on the drums, perhaps in celebration of the success of his first official visit to Japan. 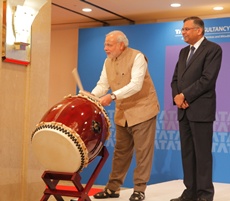 A day after signing a number of deals with Japanese PM Shinzo Abe, Modi amazed everyone when he played the traditional Taiko drums with great vigour.

Modi's performance came at the launch of Tata Consultancy Services' Technology and Cultural Academy in Tokyo.

After concluding his opening remarks, TCS chief executive N Chandrasekaran invited the PM to try his hands on the drums after the professional drummers had finished. Modi played the drums with brio, at a fast tempo.

After flagging off the first batch of students who will be coming to India for training with TCS, Modi asked IT experts to step out of their rooms and travel across India to enhance their learning.

He added in a Tweet released by the Prime Minister's Office: "I can tell you that even if you stay for six months and want to enjoy a new dish daily, you will not have to repeat a dish."

He further underlined that the 21st century is the century of knowledge and the country with "knowledge and information will lead the world" rather than ''those who have wealth and arms''.

He also referred to India's 'knowledge' heritage and leadership of the world in the past, through institutions such as Taxila and Nalanda.

He hoped the students would come back with fond memories and become ambassadors of India.

Earlier in the day, the PM addressed students at the Sacred Hearts University in Tokyo and met leaders from across the political spectrum of Japan.

Modi also met the head of the Sasakawa-India Leprosy Foundation and said: ''Service to people is service of God. Please continue your service.''

Later in the day, Modi will call on Japanese Emperor Akihito and deliver the keynote address at a business seminar.