Natwar Singh, India's former foreign minister who was forced out of the cabinet in 2005 despite being a long-standing Congress loyalist as he fell out with Sonia Gandhi, has claimed in his soon-to-be released biography that it was Rahul Gandhi who prevented his mother Sonia from becoming prime minister in 2004. 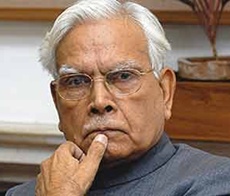 According to Natwar, Rahul Gandhi feared that his mother would be assassinated if she became PM, just like his father Rajiv Gandhi and grandmother Indira Gandhi; and forced her renunciation of the 'throne' in 2004, though Sonia claimed it was her conscience that prevented her from occupying India's highest office.

"Rahul was totally against her mother becoming PM. He said she would be killed like his father and grandmother and as a son he would not allow her to become the PM. He was very adamant and was prepared to take any step to prevent his mother from being PM," Singh said, adding that being a doting mother Sonia yielded to his son.

The details of why Natwar was forced out of office do not seem to have been elaborated in the book. It was ostensibly over the Iraq oil scam, but this pales in stature against the Congress's overall scam record and is hardly remembered now.

Singh says a meeting was held on 18 May 2004 where former Prime Minister Manmohan Singh, Gandhi family friend Suman Dubey, her daughter Priyanka and he were present, and Priyanka conveyed Rahul's 24-hour deadline, leading to Sonia withdraw her name and nominate Manmohan Singh instead.

Given the embarrassment that the revelation could make, Sonia and Priyanka met him on 7 May this year and urged him to keep it out of his book. Natwar Singh underlined the importance of the revelation by stressing that it was for the first time since his exit from Congress over 'oil-for-food' scam that the Gandhi family members had met him.

Congress spokesman Ajay Maken said, "It has become fashionable to sensationalise the contents of a book with the sole aim of ensuring better sales and free publicity." Abhishek Singhvi said Singh had an unceremonious exit from the UPA government after the 2005 Volcker Committee Report and his comments were politically motivated.

In another embarrassing revelation, Singh said Sonia had access to the government files and Pulok Chatterjee, IAS officer in PMO, used to take them to her.

This is the second such claim after former media advisor to Manmohan Singh Sanjaya Baru's book created a furore by stating that Chatterjee used to take files to Sonia, and contradicts Congress's official narrative that party chief never interfered with the functioning of the Manmohan Singh government.

According to Natwar, there was no question of protest over this practice since Sonia was the "foremost" leader.

The former minister said his claims cannot be dismissed as outpouring of a man sacked from Congress. He said the very fact that Sonia and Priyanka met him barely two months before the book launch prove that they are correct.

According to Singh, he was falsely implicated by the R S Pathak inquiry on Volcker report and added that there was evidence linking Congress to the murky oil deals but those documents were suppressed. He said Sonia and PM Manmohan Singh pressured Pathak panel to indict him.

Singh said Sonia had uneasy relations with Prime Minister P V Narasimha Rao because she suspected that the trial in Rajiv murder was being delayed. He said Rao had urged him to help clear the air, even adding that he could take on Sonia but did not want to.