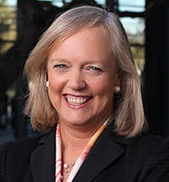 Hewlett-Packard CEO and president Meg Whitman has been appointed chairman of the board of directors. The board too has also been expanded, with the addition of a 12th member.

Whitworth's appointment as interim chairman came in April 2013 after the resignation of Ray Lane, and was only intended as a stop-gap measure till HP identified a permanent chairman.

The company further announced a couple of other changes to its existing board, with  current director Pat Russo being appointed lead independent director and Klaus Kleinfeld, chief executive and chairman of Alcoa, joining the board.

Whitman has been president and chief executive officer of HP since September 2011 and a member of the board since January 2011.

"I'm extremely pleased that the board has elected Meg its chairman and Pat lead independent director," said Ralph Whitworth, departing chairman of HP's board.

"Meg and Pat are unwavering in their commitment to the corporate governance, capital allocation and management incentive principles that drove our decisions these past three years. They will stick to and strengthen the critical practices and disciplines we've put in place. HP is in great hands."

Gary Reiner, chairman of the nominating, governance and social responsibility committee, said, "Meg has been an outstanding leader since coming to HP, and we believe that as chairman she can most effectively drive the turnaround and continue to build value for our shareholders,."

Reiner added, "Throughout Pat's three years on the board, her deep operational and technology experience and her commitment to governance best practice have proved invaluable. She was the obvious choice to step in as lead independent director."