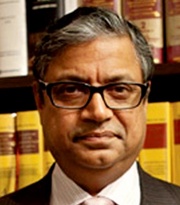 Former Solicitor-General of India Gopal Subramaniam has withdrawn his candidature for appointment as a Supreme Court judge, apparently over lack of support from the current government for his candidature.

Alleging a "dirt-digging exercise" by the new Bharatiya Janata Party-led government, Subramaniam has written to Chief Justice of India R M Lodha saying, "I'm fully conscious that my independence as a lawyer is causing apprehensions that I will not toe the government line. This factor has been decisive in refusing to appoint me (as a judge)."

He reportedly told the CJI that he had found out the law minister had initiated an inquiry against him "with a clear mandate to describe me as unsuitable."

The 56-year-old senior lawyer was one of the four nominated for judgeships by the Supreme Court collegium comprising the Chief Justice and the four senior-most judges in May, days before the BJP came to power.

But the new government had reportedly decided to ask the collegium to reconsider Subramanium's nomination.

Subramaniam told the Chief Justice he was being targeted for displaying "independence and integrity" when he assisted the court twice in a case involving the 2005 encounter killing of Sohrabuddin Sheikh in Gujarat, the state ruled by Narendra Modi from 2001 till he took charge as Prime Minister last month.

Trusted Modi aide Amit Shah, who was the state home minister at the time, faces legal scrutiny in the Sohrabuddin case.

"I have no personal vendetta or grudge against Amit Shah," he reportedly said in the letter, which talked about his "serious doubts" about the government's ability to respect the "independence, integrity and glory" of the judiciary. He also said he was "sorry that the Supreme Court did not stand by me".

As amicus curiae in the Sohrabuddin fake encounter case, Subramanium was critical of the Gujarat government headed by Narendra Modi and brought out new facts on the basis of which the Supreme Court had ordered a Central Bureau of Investigation probe into the case.

Justice N Santosh Hegde was the last lawyer to have been elevated directly to the SC. Hegde was appointed as a judge of the apex court in 1999.