The Spanish public got something of a jolt on Monday morning as in a move probably unprecedented in European history, King Juan Carlos announced that he is abdicating and handing over the crown to his son, Prince Felipe. 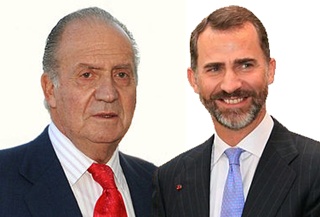 King Juan was instrumental in returning Spain to democracy after the Franco dictatorship and is widely respected across Spain for this. But in recent years, his image has suffered because of royal scandals during the economic crises that have wracked Europe in recent years.

''A new generation deserves to come to the front line,'' the 76-year-old king said in a televised statement from his palace near Madrid. ''My son Felipe, the heir to the crown, embodies the stability which is the monarchy's identity.''

The move shocked Spaniards, who flooded Twitter, using the hashtag ElReyAbdica to riff on his role during the transition and poke fun at recent royal foibles, including an ill-timed elephant hunting trip to Botswana and criminal probes aimed at his younger daughter and her husband.

Others on Twitter urged a referendum to end the monarchy.

For decades after Juan Carlos assumed the throne in 1975, Spain largely respected and admired its monarch. Yet even the memory of his heroism could not withstand expensive, indiscreet travels and a money-skimming son-in-law, at least not at a time of dire economic crisis.

In recent years, the king's reputation has been profoundly damaged, and with it, the monarchy's. The abdication Juan Carlos announced Monday, after 39 years of rule, was quite possibly the best option left to him for preserving it.

By abdicating in favour of his son Felipe, Juan Carlos, after a 39-year reign, has tapped the one adult member of the royal family apart from his Queen, Sofia, who still ranks high in the public's esteem. With a master's degree in international relations from Georgetown University, and an apparently happy marriage that has produced two adorably media-friendly young girls, Felipe seems well-prepared for the role of modern monarch.

Perhaps more importantly, he has avoided the scandals that have plagued his siblings Elena (divorce) and Cristina (alleged embezzlement and influence-peddling), and his father (breaking a hip while on a secret elephant-hunting trip in Botswana with a woman who is not his wife).