Ajit Kumar Doval, a former chief of the Intelligence Bureau (IB) and the top internal security expert in the country, has been appointed as the National Security Advisor (NSA) to Prime Minister Narendra Modi. 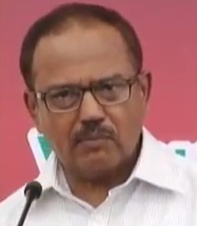 The appointments committee of the cabinet on Friday approved the appointment of Ajit Doval, IPS (Retired) as National Security Adviser.

''The appointment of Doval is effective from today on approved standard terms and conditions. The appointment will be co-terminus with the term of the prime minister or till further orders, whichever is earlier,'' a release issued by the ministry of personnel, public grievances and pensions said.

Reports quoting Bharatiya Janata Party (BJP) sources said Narendra Modi had taken the decision to have Doval as the NSA even before the election results were announced.

An outstanding intelligence officer, Doval was the first police officer to be awarded the second-highest peacetime gallantry award, the Kirti Chakra.

In 1989, he had led a team of IB officials along with the Punjab Police and National Security Guards in `Operation Black Thunder' to flush out terrorists from the Golden Temple in Amritsar.

In 1999, during the NDA years, under Prime Minister Atal Bihari Vajpayee, he was the lead negotiator for the release of the IC-814 hostages from Kandahar in Afghanistan.

Doval was also instrumental in creating new inter-service modules for effective communication among the various investigating agencies in the country.

He set up the Multi Agency Centre (MAC) to help share real-time information among the agencies. He also created the Joint Task Force on Intelligence (JTFI) on counter-terrorism.

He was also the force behind the Prevention of Terrorism Act, 2002, that gave sweeping powers to the police to combat terror. The law, however, was scrapped as soon as the UPA government came to power in 2004.