The Maharashta government has reinstated two senior Indian Administrative Service officers who were suspended after being charged in Mumbai's Adarsh Housing Society scam two years ago. 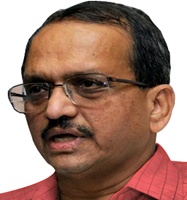 Former Mumbai Municipal Commissioner J M Phatak and former state finance secretary Pradeep Vyas are now awaiting their new postings. Both officials had earlier been arrested in the case. At the time of the arrest, Phatak was serving as a member secretary of a statutory development board while Vyas was finance secretary.

''Since the officials have already been charged by the CBI and two years have passed since their suspension, the government decided to reinstate them. The departmental inquiries against them will continue,'' state chief secretary J S Saharia said.

Vyas was accused of accepting false income documents from prospective members of Adarsh society when he was posted as the collector of Mumbai. His wife, IAS officer Seema Vyas, was later given a flat in the building, allegedly in return for this favour.

Phatak is accused of illegally clearing additional height for the building without referring it to the civic body's high rise committee. His son Kanishka Phatak later got a flat in the building.

Besides being charged by the CBI, the two bureaucrats were also indicted by the Adarsh Commission of Inquiry for ''giving permissions as quid pro quo'', in exchange for favours.

Little about Vyas is in the public domain; but Phatak did make one memorable move during his tenure as head of the Brihanmumbai Municipal Corporation, India's richest civic body – he ensured that all municipality-related documents, including BEST electricity bills, are issued in Marathi only!

Non-Marathi residents of supposedly cosmopolitan Mumbai are still struggling to come to terms with this parochial-minded decision, as they can't read their own power bills.