U K Sinha gets unusual 2-year extension as Sebi chief

The government has extended the tenure of Securities & Exchange Board of India chairman U K Sinha by two years in an unusual move, as his recent predecessors have not had more than three years at the helm of the stock market regulator. 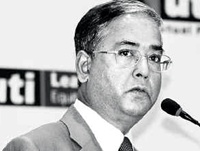 The finance ministry issued a notification on Thursday night that Sinha would continue as SEBI chairman till 2016, giving him a full five years at the helm.

Sinha's re-appointment was reportedly being processed for the past several months, though the official notification came only on Thursday.

Under his stewardship, Sebi initiated several reform measures in the capital market, including more stringent disclosure norms, stricter regulation of merchant bankers, and the introduction of a new category of foreign investors. In recent times, SEBI has also been actively cracking down on illegal money-raising schemes.

Sinha, a 1976-batch Indian Administrative Services officer who took voluntary retirement, and subsequently became the chairman and managing director of UTI Asset Management Co before moving across the road to the SEBI headquarters in the Bandra-Kurla Complex at Mumbai.

He has had a long stint in the finance ministry, first handling financial institutions and then taking charge of the capital markets division where he oversaw the UTI restructuring.

Sinha's three predecessors, C B Bhave, M Damodaran and G N Bajpai, had three-year terms. Only D R Mehta had served as Sebi for the longest a longer duration, from 1995 to 2002.

Meanwhile, there is no clarity on Sebi getting more powers to crack down on illegal investment schemes since an ordinance promulgated twice in this regard has again lapsed.