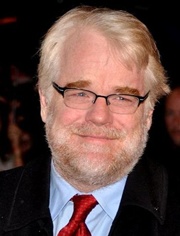 Hoffman, 46 who won the Best Actor award in 2005 for his portrayal of the author and journalist Truman Capote, the Hollywood production Capote, died in Manhattan's West Village.

A visiting friend found him dead at 11.30 am this, The Telegraph reported quoting official sources.

According to early reports, officials from the medical examiner's office were still working to determine exact cause of death, though sources said that a drugs overdose was looked ''looked likely'' responsible.

The actor had only last year spoken about life-long struggle with alcohol and drug addiction. A screenwriter found him lying on the bathroom floor of his apartment a syringe still stuck into his arm, according to several reports which cited police sources.

According to The New York Times, which cited police sources, two envelopes containing what appeared to be heroin were also found at his side.

Hoffmann first won critical acclaim in the 1990s with films including Boogie Nights and the Big Lebowski.

Throughout his career Hoffman featured in independent films as also in Hollywood blockbusters such as Mission Impossible III.

His latest role was in the Hunger Games series of films.

Terming his death "tragic and sudden", Hoffman's family said in a statement yesterday, "We are devastated by the loss of our beloved Phil and appreciate the outpouring of love and support we have received from everyone.''

Apart from films, Hoffman also starred in Broadway plays and was nominated for two Tony Awards.

Hoffman's 60 plus film credits include Magnolia and The Master with director Paul Thomas Anderson, for which he won nomination for a best supporting actor Oscar.

In 2010 Hoffman made his debut as a film director, with Jack Goes Boating, in which he also starred.

According to British film critic Jason Solomons, he "lit up the screen".  Solomons noted, he said he would take the weirdest parts and give them a human element.

He added, Hoffman a fantastic director as well and showed a real touch with actors.