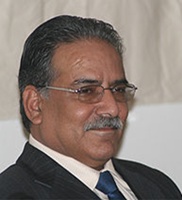 Nepal seemed to be on the brink of a fresh political crisis after Maoist supremo Prachanda and his party, the United Communist Party of Nepal-Maoists (UCPN-M), suffered a massive setback in the elections to the constituent assembly.

Nepal's Maoist leader Pushpa Kamal Dahal, known as Prachanda, on Thursday said his party would not accept the results of the recent election in which his party trailed two other parties.

Prachanda himself lost to Nepali Congress candidate Rajan K C from Kathmandu-10 constituency, and was trailing in another, Siraha-5.

In a press conference on Thursday, Prachanda demanded that the authorities immediately stop counting ballots cast in Tuesday's election, alleging that the elections were rigged by switching off ballot boxes.

"We will not accept any irregularities and conspiracy to subvert the will of the people. We will start a people's movement against this subversion," Prachanda said.

The irregularities, according to Prachanda, were committed by 'outside forces' while transferring ballot boxes to counting centres. "If the counting is not stopped immediately, we will not associate ourselves with the electoral process and will stay away from the new constituent assembly. Let the Election Commission (EC) and the political parties take this seriously."

His supporters outside the party headquarters raised threats of repeat of the crisis years saying, "Prachanda, give us the order, we are ready to wage war."

Chief Election Commissioner Neelkantha Uprety asserted that the "counting process will continue as scheduled", and asked all parties to honour the "mandate that the people have expressed through ballots".

Former US President Jimmy Carter, who is monitoring the election called the poll "fair" and congratulated the government, EC, voters and parties for mass participation.

Carter is also believed to have asked Prachanda to accept setbacks in politics, and said it was "something I have faced many times in my career".

Preliminary results of the elections are expected on Friday, but the full counting is expected to take weeks.