Some commentators have accused world champ Anand of not pushing hard enough with White - but these are early days in a historic chess match, says Jagdeep Worah

In what is probably the most-watched chess championship match in history in terms of a live audience, five-time world champion Vishwanathan Anand and his challenger, fast-rising star Magnus Carlsen of Norway, settled for rapid draws in both games over the weekend. 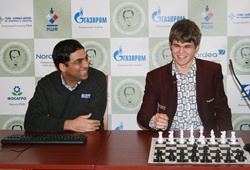 The play was on expected lines, with Anand seeming more aggressive but Carlsen throwing back all challenges to his position. Both players were clearly well-prepared and played almost by rote.

Commentators agreed that this is the most widely-covered chess match they have seen, with front-page newspaper headlines and live coverage by state-owned TV broadcaster Doordarshan.

The Indian media coverage, as usual, contains more hysteria than actual information – not a single newspaper has bothered to publish the game moves, which would hardly take up the space used for a minimal 'display' ad.

Many Indian reports tendentiously suggest that Anand did not push hard enough for a win when he had the white pieces in the second game, played on Sunday. However, draws are the norm at this level of chess, with both players struggling for miniscule advantages and neither willing to take on risky positions.

The 22-year-old Carlsen has already become the world's top-ranked chess player, leading some experts to predict that he will be the next Fischer. Anand (43) trails him by over 100 points in official rankings.

On the other hand, Anand is known to bring out his best during match play, though Carlsen has proved himself the superior tournament player.

Moreover, Anand is playing on home ground – he was brought up in Chennai – and also has the advantage of experience, having successfully defended his title five times. He has been the undisputed world champ since 2007.

The bonhomie between the two players, as seen at press conferences, is a refreshing change from Anand's 2010 title match against Vaselin Topalov in Sofia, Bulgaria.

Not only was Anand's request for a delay due to travel problems ignored, but Topalov refused to speak to him or even exchange the customary handshake before and after games. Nonetheless, Anand retained his title.

At the end of Game 2 on Sunday, Anand who played White agreed that he could have gone for sharper variations on move 12, but was not sufficiently prepared in the particular line of the Caro Cann defence that Carlsen chose; and decided to play safe.

Carlsen virtually echoed Anand's comments, saying that after the exchange of queens that he initiated around move 17, the game was destined for a draw.

Billions around the world are following what is the most highly anticipated chess match since American Bobby Fischer beat Russian Boris Spassky (of the then USSR) in the height of the Cold War.

Bookmakers put Carlsen as the 3/1 favourite. Yet smart money (including this writer's) may well be on Anand, given his experience, depth of preparation, and home-ground advantage.