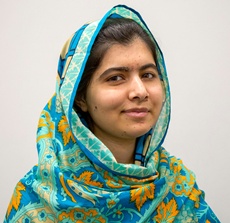 Recognition continues to pile up for Malala Yousafzai, the Pakistani teenager who was shot and almost killed by Taliban militants for championing education for girls. On Thursday, she was honoured with the Sakharov human rights award by the European Parliament.

"The European Parliament acknowledges the incredible strength of this young woman," said Martin Schulz, the president of the EU legislature. "Malala bravely stands for the right of all children to be granted a fair education. This right for girls is far too commonly neglected."

The young activist was shot in October last year in the Swat Valley district of Pakistan for speaking out in favour of girls' rights to education. She has also been nominated for the Nobel Peace Prize.

The Sakharov Prize for free speech is awarded by the European Parliament annually in memory of Soviet physicist and dissident Andrei Sakharov.

"Today, we decided to let the world know that our hope for a better future stands in young people like Malala Yousafzai," said the chairman of the conservative European People's Party (EPP), Joseph Daul.

Edward Snowden, the US whistleblower who blew the lid on his country's massive global electronic spying, was also a contender for the €50,000 prize, Europe's top human rights award.

Malala rose to prominence in 2009 when she wrote a blog for the BBC Urdu service about her life under Taliban rule and the lack of education for girls.

She received a standing ovation in July this year for an address to the United Nations General Assembly, in which she vowed she would never be silenced (See: Education a must, Pak Taliban victim Malala Yousafzai tells UN).