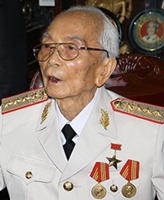 Vo Nguyen Giap (pronounced Vo Nwin Zhap), the legendary Vietnamese general and the last of the surviving Communist revolutionaries who drove colonial powers France, and later, the United States out of Vietnam during the post-war years, died on Friday in Hanoi.

Gen Giap, who was believed to be 102, died in an army hospital.

Gen Giap was the most prominent military commander, beside Ho Chi Minh, during the Vietnam war and was responsible for major operations and leadership until the war ended.

From the early 1960s to the mid-1970s, he, along with his mentor, Ho Chi Minh, was the face of an implacable enemy, as ruthless with his own forces as he was with his opponents.

Despite staggering losses, costing more than 2.5 million lives - 58,000 of them American - and superior American firepower, the war in Vietnam dragged on, sapping the United States treasury and Washington's political will to fight.

The war also bitterly divided the country in an argument about America's role in the world that continues to echo even today.

He also served as a member of the Politburo of the Vietnam Workers' Party, which in 1976 became the Communist Party of Vietnam.

A teacher with no formal military training, Vo Nguyen Giap joined a ragtag Communist insurgency in the 1940s and built it into a highly disciplined force that through 30 years of revolution and civil war ended an empire and united a nation.

While admirers put him in the company of MacArthur, Rommel and other great military leaders of the 20th century, critics say his victories had been rooted in a profligate disregard for the lives of his soldiers.

Despite heavy losses during the Tet offensive of 1968, General Giap had expected the offensive to set off uprisings and show the Vietnamese that the Americans were vulnerable.

Gen William C Westmoreland, who commanded American forces in Vietnam from 1964 until 1968, once said, ''Any American commander who took the same vast losses as General Giap would not have lasted three weeks.''

General Giap, however, knew well that that the loyalty of Vietnam's peasants was more crucial than controlling the land on which they lived and that the Vietnamese would be willing to bear any burden to free their land from foreign armies.

He also knew well that the success in a war depended as much on propaganda as it did on success in the field.

In fact, it was the Tet Offensive of 1968 that finally led to the withdrawal of American forces from Vietnam.

The televised savagery of the fighting fuelled waves of protests amidst growing opposition to the war the United States.

President Lyndon B Johnson, who was contemplating retirement months before Tet, decided not to seek re-election, and the election of Richard M Nixon in November, the long withdrawal of American forces began.

The north-south division of Vietnam also did not last after the withdrawal of US forces. US aid to South Vietnam trickled to $1 billion by the year 1974 from levels around $30 billion at the peak of Vietnam war.

The government of President Nguyen Van Thieu in South Vietnam had difficulty paying even the wages of its army, and desertions became a problem. And, in the spring of 1975, Giap sent four star General Van Tien Dung to launch the deadliest attack on Buon Ma Thuot.

After a series of offensives Giap finally sent forces under General Le Tr?ng Tan to Saigon and Tan captured Duong Van Minh, the last president of the Vietnamese Republic, alive, on 30 April 1975.

Soon afterward, the Socialist Republic of Vietnam was established.