US National Academy of Engineering to induct Ratan Tata tomorrow 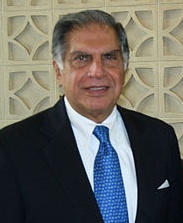 The prestigious National Academy of Engineering in the US is all set to formally induct India's leading industrialist Ratan Tata, chairman emeritus, Tata Group, tomorrow for his "outstanding contributions" to industrial development in India and the world over.

The chairman emeritus of the Tata Group, one of India's largest and oldest conglomerates, would be inducted as a Foreign Associate, according to a statement by the National Academy of Engineering.

The National Academy of Engineering (NAE), a private, independent, non-profit institution has been providing leadership in engineering to the US since 1964, the year it was founded.

With the 69 members it elected this year, the NAE brought the US membership to 2,250 and the number of foreign associates to 211.

University of Southern California president C L Max Nikias said it was a great pleasure to congratulate Ratan Tata as he joined the National Academy of Engineering.

He added, Tata's accomplishments as a visionary leader and business innovator were recognised and studied throughout the world.

He said, the revolutionary products he had steered to market had redefined 21st century engineering and manufacturing paradigms, and created a period of unprecedented growth and prosperity that had benefited people all over the globe.

Meanwhile, Outlook magazine reported that in his first interview after his retirement in December 2012, Tata had laid out a rather busy plan for himself - flying, taking piano lessons and spending time with the Tata Group's philanthropic trusts which he would be heading.

However, 10 months into his retirement, Tata seems busy with not only the activities he had set out for retirement, but also with new initiatives for the group.

Outlook said that though he had anointed Cyrus Mistry as chairman of Tata Sons and made way for him last December, it was common knowledge that Ratan Tata's influence reigned supreme in the steel-to-software conglomerate.

Though he had made it clear that after retirement, he did not want to have his ''shadow hanging over the group; a ghost walking in the corridors'',  the group seems to be unable to disassociate it self from his image and brand equity.

According to corporate watchers, Mistry would have to rely on the Ratan Tata brand name till he was able to steer the group his own way.

According to T V Mohandas Pai, chairman, Manipal Education, Ratan Tata was a great advantage to the group, and during the current transition period, his name would be there. He added, for a group that big, the transition could take some years.