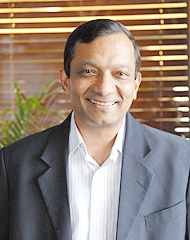 Mahindra & Mahindra (M&M) has elevated Pawan Goenka, president of automotive and farm equipment sectors, as executive director, its first ED appointment to the board since 1992.

He will now be designated executive director and president (automotive and farm equipment sectors), the company said in a statement.

''Pawan has played an integral role in transforming the Group's automotive product development capabilities, and has provided growth and strategic direction to both automotive and tractor businesses. I am confident that he will add tremendous value to the Board by providing fresh insights and invaluable guidance on key issues facing the company,'' said Anand Mahindra, chairman of Mahindra Group.

''I look forward to the future with a greater sense of responsibility, and will strive to contribute my best to meet the long term aspirations of all stakeholders,'' said Goenka.

Goenka joined M&M in 1993 as general manager research and development. He was responsible for the development of several new products including the Scorpio.

He became executive vice president, product development in September 2001 and was promoted to the position of chief operating officer of the automotive sector in April 2003.

The appointment as Executive Director and president (automotive and farm equipment sectors) will come into effect from 23 September 2013.

Goenka is a mechanical engineer with a B Tech from IIT Kanpur and a PhD from Cornell. He has also done the advanced management programme (AMP) at the Harvard Business School.

He joined M&M in October 1993 as general manager R&D, after 14 years of experience at General Motors,in various R&D capacities.

Under his leadership M&M R&D launched a slew of new products such as PikUp, Marshal, Armada 98, Bolero and Load King among others.