Elon Musk, the chairman and CEO of Tesla Motors Inc and Space Exploration Technologies Corp, revealed on Monday some details of his plans for the Hyperloop, releasing a 57-page technical white paper titled "Hyperloop Alpha."

The Hyperloop is intended to become the 'fifth' mode of transportation - a tube under or over the ground that would transport a dozen or so people in individual pods at ultra-fast speeds, like something out of science fiction. Los Angeles to San Francisco could be covered in 30 minutes, with the pods travelling up to 800 miles per hour.

Nonetheless, the historical reality remains that economic hurdles may prove more obdurate than the technological difficulties. In the longer term, the Hyperloop will have to deliver a service the traveling consumer will want and be willing to pay for before it can create the revolution Musk envisions.

As one commentator observed, mega-projects need to do more than satisfy the egos of engineers. Their social impact and practical importance depend crucially on their ability to deliver broad-based benefits in tangible ways that become the foundation for long-term sustainability. 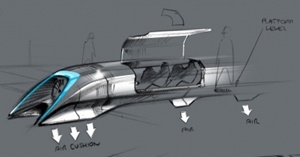 As Musk envisions it, the Hyperloop would transport people from city to city via pods enclosed inside tubes. He describes the design as looking like a double-barrel shotgun with the tubes running side by side for most of the journey.

Musk posted a blog entry on Monday on his much-hyped hyperloop concept, followed by a conference call with reporters.

Most of Musk's entrepreneurial career has been spent attacking businesses that he deems inefficient or uninspiring. He co-founded PayPal in a bid to shake up the banking industry and then used the fortune he made selling the start-up to EBay Inc to fund equally ambitious efforts in transportation.

Tesla for example has built the highest performing, highest rated mainstream all-electric car and a complementary network of charging stations scattered around North America. Meanwhile, SpaceX competes against entire nations in the market to send up satellites and resupply the International Space Station.

Musk says the hyperloop concept came about after he grew disenchanted with California's upcoming high-speed rail system. Construction on a small section of the train is meant to begin in earnest this year. By 2029, some 800 miles of track should link cities from San Diego to Sacramento at speeds of more than 200 miles per hour. The train, which has endured much political wrangling, has been budgeted at about $70 billion.

''You have to look at what they say it will cost versus the actual final costs, and I think it's safe to say you're talking about a $100 billion-plus train,'' Musk said, while also knocking the train as slow and a horrendous land rights mess.

By placing the Hyperloop on elevated columns, Musk thinks he could avoid many of the land issues. The tubes would, for the most part, follow Interstate 5, the dreary but direct freeway between Los Angeles and points near San Francisco. Farmers would not have swaths of their land blocked by train tracks but could instead access their land between the columns.

Musk figures the Hyperloop could be built for $6 billion with people-only pods, or for $10 billion with the larger pods capable of holding cars. So in effect, he's proposing an alternative that's four times as fast and a tenth of the cost of the high-speed rail.