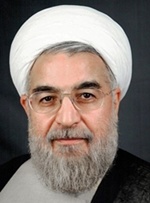 Iran's new president Hassan Rouhani on Tuesday said Iran was ready for open and serious negotiations on the country's disputed nuclear programme. He did not specify what Iran was prepared to do to facilitate open nuclear negotiations.

While Rouhani repeatedly suggested openness in direct talks with the United States, he broke no new ground on Iran's position regarding the nuclear dispute. He also wanted the United States to take the first step in the stalled nuclear negotiations.

At the same time, Rouhani's remarks appeared to be a change of tack for the sanction-hit Islamic Republic.

''As the president of the Islamic Republic of Iran, I state that the Islamic republic system is very seriously determined to solve the nuclear issue. It will defend its people's rights and at the same time will remove the concerns of the other party,'' Rouhani said.

''What matters to us is a practical response from the US government, not statements,'' he said. ''If we feel that the Americans are truly serious about resolving problems, Iran is serious in its will to resolve problems and dismiss worries. If they are serious, too, naturally things will go ahead, and we will see practical results.''

Rouhani was, however, critical of the anti-Iran group, which he referred to the ''warmongering pressure groups'' that is confusing the White House.

Apparently, Rouhani was referring to pro-Israel group in the US Congress that pushes for strong sanctions against Iran. US and its allies blame the Iranian government of delaying negotiations to continue with the development of nuclear weapons technology.

Iran asserts that its nuclear programme is aimed at developing technology related to atomic power for energy and medical needs.

Iran would uphold its right to develop nuclear technology "on the basis of international law" and would not abandon its nuclear programme, Rouhani said.

"We will not do away with the right of the nation," the Presdent-elect said. "However, we are for negotiations and interaction. We are prepared, seriously and without wasting time, to enter negotiations which are serious and substantive with the other side."

The fact remains that Israel considers Iran a threat to its nationhood and Iran too has often threatened to remove Israel from the face of earth.

Responding to Rouhani's remarks, the US state department reiterated its position that Iran is in violation of United Nations Security Council resolutions over its uranium enrichment programme and it was for Iran to take the first steps.

''We've also expressed an openness to having direct discussions with Iran,'' state department spokeswoman Jen Psaki, said at a daily news briefing. ''But the ball is in their court. We still feel that they need to take steps to abide by their international obligations, and we're not at that point.''