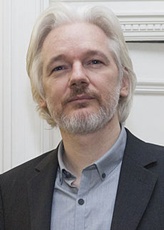 "The government kept Bradley Manning in a cage, stripped him naked and isolated him in order to break him, an act formally condemned by the United Nations Special Rapporteur for torture. This was never a fair trial," Assange said from inside the Ecuadorean Embassy in London, where he has been in asylum for more than a year.

Assange said WikiLeaks and Manning's own legal team would not rest until the judgement was overturned.

"It is a dangerous precedent and an example of national security extremism. It is a short-sighted judgment that cannot be tolerated and it must be reversed," he said from his new and probably cramped headquarters.

After eight weeks of arguments and testimony, the reading of the verdicts took barely five minutes.

Once Judge Lind had uttered the not-guilty verdict to the charge of aiding the enemy, she delivered a rapid fusillade of mostly guilty verdicts on the other charges, each time glancing over her glasses at Manning, The Guardian reported.

The sentencing phase could last several weeks, with both sides expected to bring forward numerous witnesses.