Tata Sons today announced the appointmnt of Dr Nirmalya Kumar as a member of the Group Executive Council reporting to chairman Cyrus P Mistry from 1 August 2013.

Dr Kumar is currently professor of marketing and co-director of the Aditya Birla India Centre at the London Business School.

He is one of the world's leading thinkers on strategy and marketing; the Economist referred to him as a ''rising superstar'' in its cover story ''The New Masters of Management."

He is also a member of the board of governors of the London Business School and has served on the boards of several top companies.

With his appointment at the Tata Group, Dr Kumar will be responsible for strategy at the group level and lend his expertise in strengthening customer-centricity across group companies.

One of the world's leading thinkers on strategy and marketing, Dr Kumar was included in Thinkers50, a the biannual listing of the top 50 management thinkers in the world and received its "Global Village Award".

Tha award is conferred on people who have contributed the most to the business community's understanding of globalisation and the new frontiers established by emerging markets. 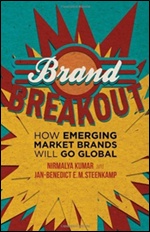 Dr Kumar has written six books, five of which have been published by Harvard Business Press: Marketing as Strategy (2004), Private Label Strategy (2007), Value Merchants (2007), India's Global Powerhouses (2009), and India Inside (2012), with the latest being Brand Breakout: How Emerging Market Brands Will Go Global.

Dr Kumar has worked with more than 50 Fortune 500 companies in 60 different countries and has served on several boards of directors, including billion-dollar plus companies.

Dr Kumar received his BCom. from Calcutta University (graduating first in a class of 5,251 students), his MBA from the University of Illinois at Chicago (scoring a perfect 5.0 grade point average), and his PhD in marketing from Kellogg Graduate School of Management (winning the Marketing Science Institute's Alden G. Clayton Award for his PhD dissertation).

Dr Kumar is a passionate supporter of the arts and in recognition of his patronage and promotion of South Asian arts, for which the School of Oriental and African Studies of the University of London awarded him an honorary fellowship in 2012.

Dr Kumar is the custodian of amongst the largest known private collections of paintings by Jamini Roy and Rabindranath Tagore.