Rudd back as Australian PM after Gillard loses labour ballot

Australia's first women prime minister Julia Gillard lost the labour party leadership ballot  just months ahead of the general elections due in September to rival Kevin Rudd, whom she had ousted and repalced in 2010. 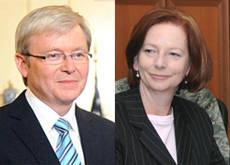 Rudd yesterday emerged Labour party leader following a ballot of MPs in which he secured 57 votes to Gillard's 45. The dramatic development unseats an Australian prime minister in the first term of office for only second time in Australia's history. The first to be removed so was Rudd.

In his victory speech, in which he promised to work towards winning the election in September, Rudd, a former diplomat and fluent Mandarin speakr, said,  "In 2007 the Australian people elected me to be their prime minister. That is a task that I resume today with humility, with honour and with an important sense of energy and purpose."

Paying tribute to Julia Gillard, he said, "She is a woman of extraordinary intelligence, great strength, great energy. All of you across the nation would recognise those formidable attributes," he said. "Julia has achieved much under the difficult circumstances of minority government, helped by a dedicated set of ministers."

"She has been a remarkable reformer and I acknowledge those contributions this evening," he said.

Rudd, who may prepone the 14 September general elections, added he had taken up the challenge of the leadership because he could not "stand idly by and allow a (conservative ) Abbott government come to power in this country by default".

However, Rudd is reported to face tough challenges ahead as he returns to lead a minority government, with almost half his party's parliamentarians bitterly opposed to him.

While Rudd is popular with voters, his  colleagues and senior civil servants loathe him for his foul-tempered, despotic and terminally indecisive nature.

Gillard's downfall was brought about by the very person who was instrumental in her ascension to the prime minister's office in 2010 -- Bill Shorten - an influential figure in Australian Labour Party, who publicly switched support to Rudd's camp 20 minutes before the voting for the party leadership.

Earlier in 2010 Shorten,  the son-in-law of Australian governor general Quentin Bryce, had a falling out with Rudd under whom he had served as his deputy.

Rudd enjoyed widespread popularity after he was elected in 2007, ending 11 years of conservative rule. However, his approval ratings dropped after he announced a new tax on wealthy mining companies, and abandoned an emissions trading scheme.