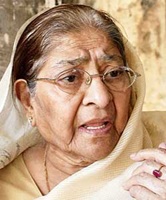 Zakia Jafri, wife of 2002 Gujarat anti-Muslim riots victim and Memeber of Parliament Ehsan Jafri, is expected to file a protest petition in a trial court in Ahmedabad today against the closure report of the Special Investigation Team probing the riots.

The SIT report gives a clean chit to Gujarat chief minister Narendra Modi and others in the Gulbarg Society massacre in Ahmedabad.

"Tomorrow (Monday) we are filing our protest petition against the SIT's closure report in our complaint against Chief Minister Narendra Modi and others, before the court," said Zakia's advocate S M Vora on Sunday.

Jafri in her complaint had sought prosecution of Modi, along with 57 others, for aiding and abetting the communal riots in which more than 1,200 people were killed. Her husband Ehsan, a former Congress MP, was among the 69 killed in the setting ablaze of the Gulbarg Housing society riots on 28 February 2002.

Hearing of the case is scheduled to be held on Monday afternoon before Metropolitan Magistrate B J Ganatra.

The Supreme Court, in an order on 7 February 2013, allowed Zakia to file a fresh protest petition and had also directed that she be supplied with the entire report of the inquiry by the SIT to enable her to file the protest petition.

Zakia has filed the petition challenging the trial court's order rejecting her plea for supply of some documents relating to the investigation in the case, including the interim report filed by SIT member A K Malhotra.

Following the apex court orders, the SIT has supplied the copy of Malhotra's report to Zakia Jafri and magistrate Ganatra has given time till 15 April to file here petition.