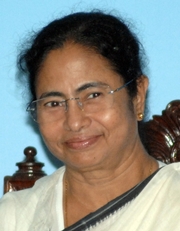 The post-mortem report of 22-year-old Student Federation of India leader Sudipto Gupta, who died while being taken into custody by the Kolkata police after a demonstration on Tuesday, clearly belies the flimsy official version that he died after accidentally banging his head against a lamp-post.

West Bengal chief minister Mamata Banerjee has strongly upheld the official version. But the autopsy report by doctors at SSKM hospital in Kolkata showed strong evidence that the Left-wing student leader was beaten up fatally. It said there were five injury marks on his body, including major ones close to his heart and brain.

"On his body there were several injury marks, which could have been the result of assault," the autopsy report said, and added that due to heavy impact on his heart, lung, and brain and multiple injuries on his body, Sudipto succumbed to his injuries.

"We call it bruised or contused lung. Several blue marks can be found in his heart and his lungs, which indicate that he could have been beaten up with something," said a senior professor of the SSKM Hospital and forensic expert referring to the report. Even internal bleeding occurred, the expert added.

The West Bengal Human Rights Commission will submit its report next week.

Meanwhile, Kolkata braced this morning for roadblocks and traffic jams after a bandh call by the SFI in protest against the custody-death of Gupta. The students will be carrying out protests at Hazra Modh, which is close to chief minister's house. A bandh has also been called in the Garia and Tollygunge areas of Kolkata.

There was high drama and anger on the streets of Kolkata on Wednesday as thousands showed up in solidarity for the family of Sudipto Gupta.

Chief minister Mamata Banerjee, after a brief visit to SSKM Hospital, said on Wednesday afternoon, ''This is an unfortunate incident. The boy accidentally dashed his head against a lamp-post.''

Banerjee, who also holds the state home minister's portfolio, left the hospital without meeting Gupta's relatives and dodged a demand for a judicial probe. She also lacked credibility when she told newspersons outside the hospital that many of her own Trinamool Congress party workers had died the same way.

Sudipto Gupta, an MA student at Rabindra Bharati University, was admitted to hospital with severe internal haemorrhages and later succumbed to his injuries. Gupta was part of a protest organised by the SFI against the postponement of college elections.

According to reports, the activist was beaten up by policemen while he was being taken to the Presidency Jail in a bus. Eyewitnesses told CNN-IBN that the police forced protesters on to a bus following a mass arrest and then Sudipto was pushed out of the bus and badly beaten up. SFI general secretary Satarup Ghosh, an eyewitness himself, said, "He was hit on his head so hard that one of his eyes came out."

The victim's father Pranab Gupta has refused to accept any help from the state government. "My son was beaten to death. Is it justice? I was a central government employee. I get pension. I cannot accept any money [from the state]. It is against my principle. She is offering me money, but can she return my son?" he said.