Queen gets a £5-mn pay hike 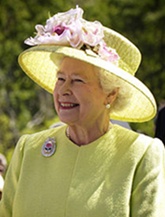 Queen Elizabeth II, who has long been complaining (through palace aides) that she is so starved of funds she can't afford the upkeep of Buckingham Palace, now has much less reason to complain, as she has been granted a hike of £5 million in the funds she receives from the taxpayer to carry out her official duties.

The figure has increased from the £31 million allocated during the previous 12 months, which included £1 million to cover the extra costs of the diamond jubilee.

The sovereign grant, which replaces the old civil list and covers the running costs of the Queen's household, has been set at £36.1 million for the 2013-14 financial year.

It came into full effect at the start of the new financial year, which began on Monday.

It also covers the maintenance of the royal palaces in England and the cost of royal travel for official engagements in the UK and overseas.

Under the new grant the Queen receives 15 per cent of the profits from the Crown Estate, but from funds two years in arrears.

The Crown Estate's 2011-12 accounts revealed profits of £240.2 million and the final figure for the grant was rounded up to £36.1 million  – very close to the estimated amount – by the royal trustees in December.

Royal accounts released last year showed the cost to the taxpayer of supporting the monarchy rose marginally during 2011-12. The Queen's official expenditure increased from £32.1 million in 2010-11 to £32.3 million in 2011-12.

Around £10 million is spent on the salaries of the Queen's staff, from footmen to chefs in the royal kitchen – but wages have been frozen for a number of years. The figure for official expenditure does not include the cost of providing security and police protection for members of the monarchy.