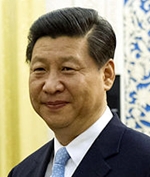 Xi Jinping, the new leader of the Communist Party of China (CPC) was today formally appointed as China's president. The appointment ended the party's four month-long, once in a decade leadership transition.

Xi (59), who was chosen as the CPC's general secretary in November, received the approval of the National People's Congress, a largely rubber-stamp parliament, at the Great Hall of the People in Beijing this morning.

Of the NPC's 2,963 delegates, 2,956 were present and cast their ballot, with 2,952 voting for Xi with one vote going against him. As expected Politburo member Li Yuanchao (63) was chosen vice president, with 2,839 votes in his favour and 80 against.

The NPC's delegates meeting in Beijing formalised the appointment of Xi. They would also choose a vice president and the head of the Parliament's next Standing Committee.

The congress would appoint a premier tomorrow, expected to be second-ranked Li Keqiang, as also choose state councillors, including China's next top diplomat, and ministers on Saturday.

The selection process today, described by Chinese state media as an ''election'', was essentially a mere formality: as even the state-run Xinhua news agency explained, ''each vacancy in the elections will have only one candidate.''

The candidates had been decided well in advance at the party's internal deliberations. Delegates could vote for or against the listed candidate and list a candidate of their choosing, although the NPC usually strictly followed the lead given by the party in selecting representatives.

Xi's government appointment was effectively guaranteed by his party position.

According to Associated Press, Xi formally takes the reins of the world's second-largest economy with Li Keqiang, who would be anointed premier on Friday.

The report said the party leadership was the real source of authority in China, however the title of head of state would enhance Xi's public and international role.

Since his taking the top Communist post in November, Xi had pledged to preserve the supremacy of the ruling party, as also to bring about improvement in livelihoods, implement economic reforms, and bust corruption, which had alienated popular opinion.

In the months following the promotion of Xi several lower-level officials had been exposed for graft in efforts that had been lauded in state media as proof of a crackdown.

Though  Xi had been officially elected for a five-year term, barring extraordinary events the 59-year-old would go on to hold  the position for a decade.