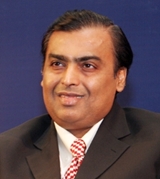 Reliance Industries Ltd (RIL) chairman Mukesh Ambani is bullish on both India and the US, saying that the US will lead global economic recovery due to a fundamental transformation of the energy scene.

And he is ''more optimistic than most'' about India because the aspirations of a billion people cannot be long ignored.

In an interview to CNN at his specially-built 27-storey home in one of the priciest areas of Mumbai, Asia's second-richest man said he was ''very bullish" on India despite a slowdown of its GDP growth - now projected at 5 per cent for the fiscal year ending March - and foreign investors' complaints about poor infrastructure and lack of reform.(See: Bullish on US recovery this year: Mukesh Ambani)

"India has had some slow growth, but I'm really very optimistic on India," he said. "I'm very bullish on India, because it's really the aspirations of a billion people. And ours is a country where all the billion count.

"We are on a long-term growth trajectory. And this is just not growth in terms of GDP numbers, right? This really is for the well-being of each and every Indian. And that's the aspiration," Ambani said.

On the global scenario, he said, "My view is that this year we will see the beginning of a recovery, particularly in the US" because "there has been a fundamental transformation in the energy scene in the US".