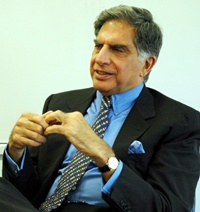 Tata Group head Ratan Tata has called for increased cooperation between India and Australia, which, he said, would benefit both the countries.

Speaking at the University of New South Wales, where he was awarded an honorary Doctorate of Business last night, Tata said the two countries should do more business together, particularly in the technology sector.

He said there were good reasons for the countries to "do much more together than they have done".

"Australia is a vibrant economy," Tata said, adding that there are some high technology areas where Australia is "at the forefront" and India could benefit from that.

India, he said, also offers a huge market for Australia with a larger population of some 350 million middle class consumers, which would grow to 600 million soon.

"It would be terrific to see Australian companies have products which could have access to a market of that scale," he added.