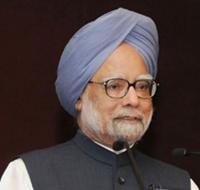 While social activist and anti-corruption crusader Anna Hazare refuses to leave Tihar Jail, where he was remanded after his arrest on Tuesday, Prime Minister Manmohan Singh today made a rather bland statement on the issue in Parliament.

"It's my painful duty to report to this house certain events that took place yesterday in New Delhi. After extensive consultations the government has introduced a bill in the Lok Sabha; the bill has been referred to the standing committee.

''Anna Hazare wants his bill to be passed by Parliament. The government has introduced a Lokpal Billin Parliament. Anna and supporters are persisting with the demand for their version, the 'jan lokpal' bill," Singh said in a statement before both houses of Parliament.

He insisted that the Delhi police "had no choice" but to arrest Hazare, and that while his government "acknowledges the right of citizens to hold peaceful protests," conditions that guarantee law and order need to be met.

Asserting that Parliament was the sole body to frame laws, Singh said Hazare and his civil society team had sought to impose a version of Lokpal Bill, which was "totally misconceived" and fraught with "grave consequences" for parliamentary democracy.

Singh said the government acknowledges the right of citizens to hold peaceful protests, but permission for such protests is subject to "appropriate conditions".