India today moved a proposal at the WTO mini ministerial seeking to amend laws on unilateral action by members on trade issues, which found immediate support from China and South Africa. 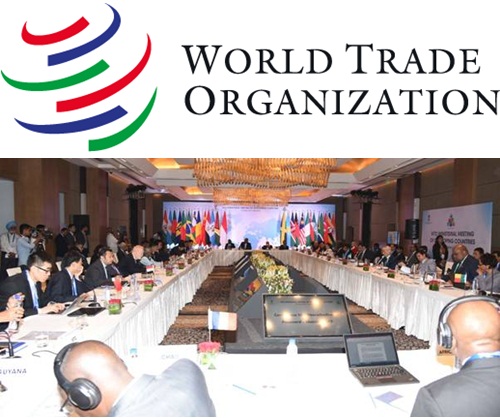 India also opposed a proposal moved by the European Union in the WTO on Friday to create new e-commerce rules saying that it will impact domestic industry and job creation in host countries.
India’s proposal to safeguard the right of special provisions for developing countries has been challenged by the US.
The proposal was circulated in Geneva among the 22 member countries who are participating in the New Delhi’s mini ministerial meeting on Monday and Tuesday.
“South Africa and China are excited about our proposal and the meeting,” said an official in the know of the details, adding that India may modify its proposal as per other countries, if need be. South Africa’s trade and industry minister Robert Davies and a 14-member delegation the largest- from China, led by assistant minister of commerce Ren Hongbin, is attending the meeting.
Addressing the mini ministerial commerce secretary Anup Wadhawan said the existential challenges to the multilateral rules based trading system are manifest in a spate of unilateral measures and counter measures, deadlock in key areas of negotiations and the impasse in the appellate body.
He said the logjam in the appellate body is a serious threat to the dispute settlement mechanism of the WTO and the implementation function of the organisation. The fundamentals of the system are being tested through a tide of protectionism around the world vitiating the global economic environment. The situation does not bode well for developing countries, including the LDCs, he said.
The harm that the institutional failure due to the collapse of the Appellate Body will cause will be felt more in developing countries, including LDCs who need the protection of the rule-based system more than developed countries. There is an urgent need to engage constructively to preserve the system and come up with constructive solutions to the problem, he pointed out
“The discussions in the meeting being held in New Delhi give a chance to reaffirm the resolve to keep development at the centre of the reform agenda. The reform initiatives must promote inclusiveness and non-discrimination, build trust and address the inequalities and glaring asymmetries in existing agreements. These asymmetries are against the interest of developing countries including LDCs. There is a need to work together to put issues of importance for developing countries and their priorities in the reform agenda.
“There has been no active engagement or movement on key issues of concerns for developing countries including LDCs in the negotiating agenda. Agriculture remains a key priority for a large membership of WTO representing the developing world. However, there is a strong push to completely relegate existing mandates and decisions and work done for the past many years, to the background,” he said.
India believes that developing countries need to work together to protect their interests in the WTO negotiations through preservation of the core fundamental principles of the WTO. The two-day meet gives an opportunity to the participating countries of developing a shared WTO reform proposal on issues of priority and interest for developing countries. This will help in building a common narrative on issues of importance for Developing Countries including LDCs.
The two-day meeting is an effective move by developing countries to positively influence the outcome of WTO reforms by making development at its core and exploring all means of saving multilateralism.
MORE REPORTS