World merchandise trade growth is expected to remain strong in 2018 and 2019 after posting its largest increase in six years in 2017, but continued expansion depends on robust global economic growth and governments pursuing appropriate monetary, fiscal and especially trade policies, WTO economists have 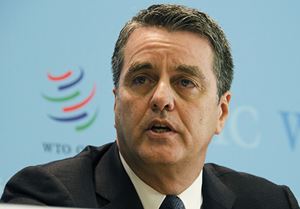 World merchandise trade volume is expected to grow 4.4 per cent in 2018, accompanied by GDP growth of 3.2 per cent at market exchange rates.
WTO said the faster trade expansion is being driven by stronger economic growth across regions, led by increased investment and fiscal expansion.
“Trade growth in 2018 is likely to fall within a range from 3.1 per cent to 5.5 per cent if current GDP forecasts come to pass, although a continued escalation of trade restrictive policies could lead to a significantly lower figure,” WTO noted.
Trade growth should moderate to 4.0 per cent in 2019 even as global GDP growth slows slightly to 3.1 per cent.
The ratio of trade growth to GDP growth should remain at 1.4 in 2018, down slightly from 1.5 in 2017.
Risks are centered on trade and monetary policy, where missteps could undermine economic growth and confidence.
An index of export orders has recently weakened, possibly signalling an effect of greater uncertainty brought about by heightened trade tensions.
The WTO anticipates merchandise trade volume growth of 4.4 per cent in 2018, as measured by the average of exports and imports, roughly matching the 4.7 per cent increase recorded for 2017.
Growth is expected to moderate to 4.0 per cent in 2019, below the average rate of 4.8 per cent since 1990 but still firmly above the post-crisis average of 3.0 per cent. However, there are signs that escalating trade tensions may already be affecting business confidence and investment decisions, which could compromise the current outlook.
"The strong trade growth that we are seeing today will be vital for continued economic growth and recovery and to support job creation. However this important progress could be quickly undermined if governments resort to restrictive trade policies, especially in a tit-for-tat process that could lead to an unmanageable escalation. A cycle of retaliation is the last thing the world economy needs. The pressing trade problems confronting WTO members are best tackled through collective action. I urge governments to show restraint and settle their differences through dialogue and serious engagement," said WTO Director-General Roberto Azevedo.
Trade volume growth in 2017, the strongest since 2011, was driven mainly by cyclical factors, particularly increased investment and consumption expenditure. In value terms, growth rates in current US dollars in 2017 merchandise exports grew 10.7 per cent while commercial services exports rose 7.4 per cent, reflecting both increasing quantities and rising prices.
However, WTO said, in light of recent trade policy developments they must now be considered to be tilted to the downside.
“Increased use of restrictive trade policy measures and the uncertainty they bring to businesses and consumers could produce cycles of retaliation that would weigh heavily on global trade and output,” WTO noted.
Faster monetary tightening by central banks could trigger fluctuations in exchange rates and capital flows that could be equally disruptive to trade flows. Finally, worsening geopolitical tensions could be counted on to reduce trade flows, although the magnitude of their impact is unpredictable. Technological change means that conflicts could increasingly take the form of cyber-attacks, which could impact services trade as much or more than goods trade, it added.
On the other hand, WTO said, there is some upside potential if structural reforms and more expansionary fiscal policy cause economic growth and trade to accelerate in the short run. The fact that all regions are experiencing upswings in trade and output at the same time could also make recovery more self-sustaining and increase the likelihood of positive outcomes.
MORE REPORTS