The Indian Space Research Organisation (Isro) on Wednesday announced it is ready for a second lunar exploration mission- Chandrayaan-2. An official statement released on Twitter said Isro is looking for a mid-July launch for the lunar mission. It is expected to land on Moon on 6 September, this year. 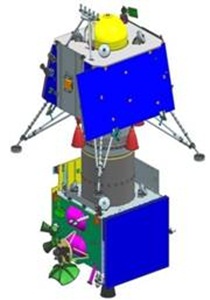 Chandrayaan-2, India’s second lunar mission, a totally indigenous mission, has three modules, namely, an Orbiter, a Lander (Vikram) and a Rover (Pragyan).
The Orbiter and Lander modules will be interfaced mechanically and stacked together as an integrated module and accommodated inside the GSLV MK-III launch vehicle.
The Rover is housed inside the Lander. After launch into earth bound orbit by GSLV MK-III, the integrated module will reach Moon orbit using Orbiter propulsion module. Subsequently, Lander will separate from the Orbiter and soft land at the predetermined site close to lunar South Pole. Further, the Rover will roll out for carrying out scientific experiments on the lunar surface. Instruments are also mounted on Lander and Orbiter for carrying out scientific experiments.
Isro said all the modules are getting ready for Chandrayaan-2 launch during the window of 0 July to 16 July 2019, with an expected Moon landing on 6 September 2019.
A Geosynchronous Satellite Launch Vehicle Mark III with an approximate lift-off mass of 3,877 kg will lift off with the Chandrayaan-2 payload from the Satish Dhawan Space Centre in Sriharikota.
The Chandrayaan-2, weighing around 3290 kg, would orbit around the moon and perform the objectives of remote sensing the moon. The payloads will collect scientific information on lunar topography, mineralogy, elemental abundance, lunar exosphere and signatures of hydroxyl and water-ice.
The six-wheeled Rover will move around the landing site in semi-autonomous mode as decided by the ground commands. The instruments on the rover will observe the lunar surface and send back data, which will be useful for analysis of the lunar soil.
MORE REPORTS