India's first interplanetary mission, the Mars Orbiter Mission or the 'Mangalyaan', which had a launch life of six months, completed four years in orbit on 24 September. 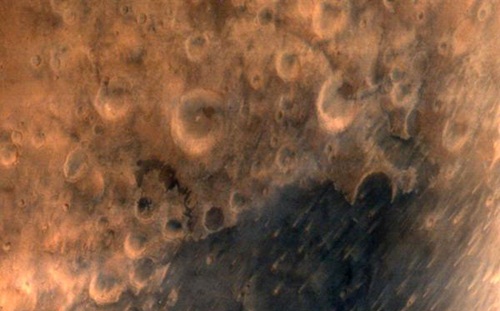 Launched on 5 November 2013, the Mars Orbiter Mission, India’s pioneering interplanetary mission to outer space, inserted the satellite into Mars’s orbit during its first attempt on 24 September 2014.
The Indian Space research Organisation (Isro) has released some stunning images of the Red Planet sent by the satellite to commemorate four years of its revolution round Mars.
The satellite is one of Isro's finest for its cost-effective engineering and construction, space-effective equipment in its payload, and its weight-balanced design.
The orbiter’s onboard camera has recorded over 980 images so far, which have been compiled into an atlas of the planet.
Mars’s two moons — Phobos and Deimos — have also been captured up close by the orbiter’s Mars Colour Camera.
Isro’s Mars Orbiter is also the only man-made satellite around Mars to catch and relay glimpses of the entire disc of Mars in a single frame, and the far side of its moon Deimos, an Isro release said.
MOM is credited with many laurels like cost-effectiveness, short period of realisation, economical weight-budget, miniaturisation of five heterogeneous science payloads etc. Satellite is in good health and continues to work as expected.
MOM is built with full autonomy to take care of itself for long periods without any ground intervention. The spacecraft came out of communication ‘blackout’ and ‘whiteout’ geometry successfully during this period.
Isro made an `Announcement of Opportunity’ (AO) through its website seeking for proposals to expand the scientific community within the country that can access and analyse MOM data. A planetary data analysis workshop was conducted to enhance exposure and reach of MOM-AO scientists.
Initial two years data of MOM were released to public through ISSDC website https://mrbrowse.issdc.gov.in/MOMLTA/.  Third year data are ready to be released to public. More than 2100 users have registered and downloaded more than 620 GB data so far.
MORE REPORTS