India is looking forward to investments in nine more projects from Asian Infrastructure Investment Bank (AIIB) after having picked up almost 28 per cent of the bank’s total lending so far of $1.4 billion for 7 projects?. 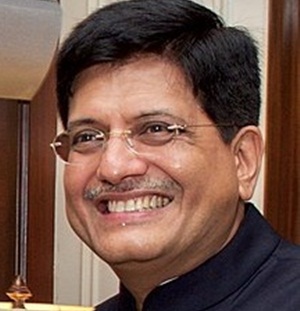 Speaking at the third annual meeting of the Asian Infrastructure Investment Bank (A?IIB) which began in Mumbai today, minister for ?railways and coal and acting minister of finance and corporate affairs Piyush Goyal said ?AIIB has focused its investment in India on lending to rural infrastructure, energy and power, environmental protection, transportation and telecommunication, water supply and sanitation and urban development and logistics.
He also said India is the largest recipient of the $4.2 billion funds disbursed by the AIIB, ?which constitutes 28 per cent of its total investment so far.
The 2018 annual meeting of AIIB is taking place in Mumbai on 25-26 June at the National Centre for the Performing Arts (NCPA) and the government has organised an India Infrastructure Expo 2018 from 24-26 June at the venue. Finance minister Piyush Goyal inaugurated the exposition today.
Speaking on the sidelines of the meeting, economic affairs secretary Subhash Chandra Garg, said India has sought $2.40 billion in loans from the Asian Infrastructure Investment Bank (AIIB) for financing infrastructure project, besides the $200 million investment planned by the Beijing-headquartered bank in India’s National Investment and Infrastructure Fund (NIIF), NIIF was set up in 2015 as an investment vehicle for funding commercially viable greenfield, brownfield and stalled projects in the infrastructure sector.
Speaking at a press conference before the third annual general meeting of its board of governors in Mumbai, AIIB vice president and corporate secretary, Danny Alexander said that of the $4.39 billion invested by AIIB, six Indian projects accounted for $1.21 billion.
India has been the largest recipient of AIIB’s funds, with financing of projects including development of Andhra Pradesh’s new capital city Amravati, besides rural roads, urban water supply and sewage management projects in Andhra Pradesh.
The other projects financed by AIIB include the Mumbai metro line-4 and irrigation and flood management project in West Bengal.
Garg added that the concept for Mumbai urban transport project phase-3 has been approved, with $475 million investment proposed for the same by India.
The meeting comes at a time when India, AIIB’s second-largest shareholder after China, has expressed concerns over its neighbour’s ambitious ‘One Belt One Road’ (OBOR) initiative aimed at connecting around 60 countries across Asia, Africa and Europe.
India has been critical of China developing the China-Pakistan Economic Corridor (CPEC), part of OBOR infrastructure initiative cutting through Gilgit and Baltistan areas of Pakistan-occupied Kashmir (PoK).
“I think those concerns you mentioned which existed when the idea was first put forward, just don’t exist anymore,” Alexander said.
Lauding AIIB for its robust processes, Goyal said? that it is a matter of great pride that a concept that was floated in 2014 was able to mature in 6-7 months, and by 2015 we had a Multilateral Development Bank in place with India being the second largest stakeholder with over 8 per cent stake.’
MORE REPORTS