The merger of online marketplaces Snapdeal and Flipkart is now virtually confirmed, with Snapdeal co-founders Kunal Bahl and Rohit Bansal likely to receive $30 million in cash each from SoftBank on their exit from the company, sources told Moneycontrol. 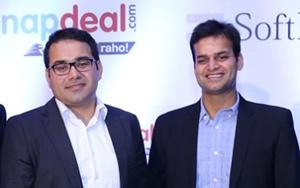 Snapdeal financer SoftBank is likely to invest a large sum in the merged entity while giving the existing stakeholders an exit.

''The company's board has reached a consensus and due diligence is likely to take place from next week. Almost all the deal contours have been finalised,'' a company official told Moneycontrol on condition of anonymity.

The two founders had earned close to Rs80 crore each from sale of shares during a large funding round led by Ontario Teacher's Pension Plan in 2015.

Snapdeal had earlier this week agreed to a non-binding letter of intent (LoI) for a merger with Indian e-retail market leader Flipkart.

The deal, which has been in works for last few months, was stuck due to disagreement amongst stakeholders over final settlement for the company's earliest investors, Kalaari Capital and Nexus Venture Partners.

Except for few top executives, others are not likely to be retained in the combined entity, said Moneycontrol's source without specifying. In February, Snapdeal went through a mass retrenchment exercise which saw over 2,300 employees being let go.

Over the last few months, the company has also witnessed massive voluntary attrition.

While the exact number of the employees in the company could not be ascertained, the company's headcount is thought to be below 2,000 people as of now.

There was no immediate clarity on whether or not the existing or former employees who have vested stock options (ESOPs) in the company would be entitled to any benefit through this deal.

Around 2,500-3,000 current as well as former employees hold close to 5-6 per cent stake in Snapdeal in terms of ESOPs.

Since its inception in 2010, the e-commerce firm has raised $1.75 billion from investors such as SoftBank, Kalaari Capital, Temasek, Alibaba Group, eBay and others.

It's largest investor SoftBank in a filing this week said that it has incurred a valuation loss of $1.4 billion for the financial year 2016-17, mainly on account of its two biggest investments in India - Snapdeal and taxi service Ola.