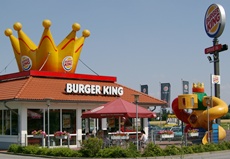 Under the terms of the transaction, which has been unanimously approved by the board of directors of both companies, Tim Hortons shareholders will receive C$65.50 in cash and 0.8025 common shares of the new company per Tim Hortons share.

With around $23 billion in combined annual sales, over 18,000 restaurants in 100 countries and two strong, independent brands, the new entity would have an extensive global footprint and significant growth potential, the two companies said in a joint statement issued today.

The companies had said on Sunday that they were in merger talks, and shares of both soared yesterday (See: Burger King in merger talks with Canada's Tim Hortons).

The shareholders of Tim Hortons would receive $65.50 in cash and 0.8025 shares of the new company for each of their shares. Based on yesterday's close, the deal values Tim Hortons at $94.05 a share, a 37 per cent premium to Friday's close of $68.78 on the Toronto Stock Exchange.

According to the companies, billionaire investor Warren Buffett's Berkshire Hathaway had committed $3 billion of preferred equity to finance the deal though, it would have no role in managing the business.

Meanwhile, the acquisition of a well known Canadian brand by a US-based fast-food company had drawn mixed reactions from Canadians. The red and gold company logo is a familiar sight across the country, and its products nicknamed (''double-double,'' ''timbits'') are part of common parlance, Bloomberg reported.

Tim Hortons was co-founded by Canadian hockey player Tim Horton in 1964 in Hamilton, Ontario, a steel town on the outskirts of Toronto.

Starting with a single coffee and doughnuts outlet in the 1960s at one location, the chain now boasts over 3,600 restaurants in Canada and more than 800 in the US. The company employs around 96,000 Canadians at its franchised restaurants.

Tim Hortons, which had been in American hands earlier, manged to keep its Canadian-ness intact. The company was bought by Wendy's International Inc in 1995 for $425 million, but was spun off in 2006.

The doughnut chain had also featured on an episode of the TV series ''How I Met your Mother'' and Jason Priestley an actor in that episode, was chosen as one of the judges for a Tim Hortons contest to create a new doughnut flavour last year.