US pharmaceutical giant Pfizer is reported to have made a tentative $101-billion (£60 billion) takeover offer for British rival AstraZeneca Plc, according to a media report. 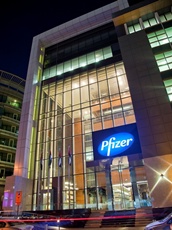 Citing investment bankers and industry sources, The Sunday Times yesterday reported that Pfizer had in recent weeks held informal talks about a $101-billion deal with AstraZeneca, but the London-based company had rejected the offer and no talks were currently under way.

New York-based Pfizer, which is sitting on a $70-billion (£42 billion) cash pile, could come back with a fresh approach, the report said.

The merger would create a company with a market cap of $300 billion and sales of $78 billion.

A potential deal with AstraZeneca would be the biggest-ever acquisition in the pharmaceutical industry, and would see another iconic British brand being acquired by a foreign company.

At $101 billion, this would be Pfizer's biggest acquisition after its 2000 purchase of Warner-Lambert Co for $90 billion. The Pfizer-Warner-Lambert merger is also the industry's biggest deal to date.

AstraZeneca, which has a market value of around $80 billion, is currently battling with declining pipelines, patent expirations of some of its best selling drugs and. along with industry peers, facing a reduction on government healthcare spending.

Formed through the £40-billion merger of equals in 1999, AstraZeneca's blockbuster drugs such as Nexium and Crestor, a treatment for high cholesterol, will lose patent protection in the next few years.

Earnings at AstraZeneca, Britain's second-biggest pharmaceuticals group, fell 6 per cent in the fourth quarter of 2013, and the drugmaker expects them to fall further in 2014 as generics start competing with Nexium, its popular heartburn and ulcer drug in the US market in May.

AstraZeneca, however, has experimental cancer drugs in the pipeline, which could be of interest to Pfizer.

Moreover, the two firms are familiar with each other's products and are working together on projects such as a new kind of clinical trial for cancer drugs announced last week.

Pfizer, whose drugs include Advil, Lyrica, Diflucan, Viagra and others, too have faced similar patent losses, particularly the blockbuster anti-cholesterol drug Lipitor.

The company, which was founded by cousins Charles Pfizer and Charles Erhart in 1849, has grown through strategic mergers and today focuses on developing treatments in immunology & inflammation, CV & metabolic diseases, oncology, neuroscience & pain and rare diseases.