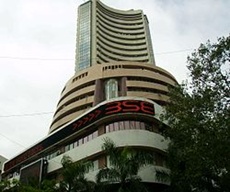 The broader markets later gave up some morning gains, but were still trading higher with half a percent gains. About 1,352 shares advanced against 1,076 declining shares on the BSE.

Sentiment was helped by a strong buzz that a policy rate cut by the Reserve Bank of India's Monetary Policy Committee is on the cards after inflation touched a recent low''. Even chief economic adviser Arvind Subramanian cited a paradigm shift in Consumer Price Index-led inflation, calling on the RBI to go for a rate cut.

A positive lead from Asia after US Federal Reserve chief indicated a gradual approach to raising US interest rates also made investors go in for fresh bets. Asian shares scaled a two-year top on Thursday as investors wagered policy tightening in the United States would be glacial at best, lifting Wall Street to record peaks and lowering bond yields almost everywhere, Reuters reported.

Equities were underpinned by a drop in bond yields as Yellen sounded cautious on inflation and noted the Fed would not need to raise rates "all that much further" to reach current low estimates of the neutral funds rate. The pan-European Stoxx 600 was 0.12 per cent higher with most sectors moving in positive ground.

All the sector indices, led by FMCG, capital goods, power, metal, banking and auto were trading in the positive zone, with gains of up to 1.06 per cent. Prominent gainers on the Sensex were ICICI Bank, ITC Ltd, L&T and Sun Pharma, gaining by up to 1.69 per cent.

There are renewed hopes of a rate cut by the Reserve Bank of India (RBI) in its policy meet next month after retail inflation hit a historically low level of 1.54 per cent in June and industrial output growth slumped to 1.7 per cent in May.