Although Finance Minister Arun Jaitley made no big-ticket announcements in the Union budget unveiled on Wednesday, the fact that it maintained an even keel saw the BSE Sensex going up by 486 points, with some clarity coming on the tax front for foreign investors, fiscal discipline and no tinkering in the capital gains tax. 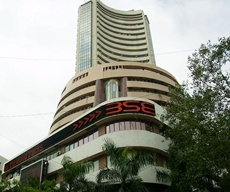 Bank stocks led the rally after the government said it would pump Rs10,000 crore into public sector banks (PSBs) in the next financial year to meet their capital requirements. Adding to the sentiment, Jaitley said the allowable provision for non-performing assets of banks would be increased from 7.5 per cent to 8.5 per cent. Stocks of PSBs rose by up to 5.64 per cent.

''FM's best action is that he has not tinkered with the equity capital gains tax regime. The markets are rejoicing that they can continue to enjoy the fruits of investment,'' Dhiraj Relli, managing director and chief executive officer, HDFC securities, told The Indian Express.

The Sensex and the NSE's Nifty soared past the 28,000 and 8,700 levels respectively, posting their biggest single-day gain since October 2016.

The rupee also rose 40 paise to end at 67.47 against the US dollar, as the bullish sentiment spread to the foreign exchange market.

Analysts said the finance minister's proposal for reduction in income tax for individuals in the Rs2.5-5 lakh income bracket and for small companies with annual turnover of up to Rs50 crore to 25 per cent will indirectly and directly boost the capital market.

''No change in long-term capital gains tax on equities has lightened the investors fear on transaction cost. The budget has given a positive momentum in the market, the focus of which was to reduce the fiscal deficit to 3.2 per cent of GDP in FY18 and infrastructure developments are welcomed by the investors,'' said Vinod Nair, head of research, Geojit BNP Paribas Financial Services.

Several analysts said tighter fiscal deficit and the push for housing, rural and infrastructure spending gave the impression of a well-grounded budget, while markets cheered both the abolition of the Foreign Investment Promotion Board as well as halving of tax rates on income bracket below Rs5 lakh.

A section of analysts said the Budget was neither popular nor populist. ''It was a rather tepid budget, as has been the case lately,'' quipped a fund manager.