More reports on: In the news, Tata Consultancy Services, Nasscom

Digital tech the new frontier for Indian IT: TCS chief at Nasscom 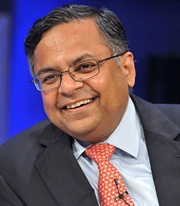 Tata Consultancy Services (TCS), the country's largest information technology services exporter, said today it expects the digital technology space to create an additional market for the company worth $3-5 billion in the next few years.

N Chandrasekaran, chief executive of TCS, said on the sidelines of the Nasscom India Leadership Forum 2014 that his company plans to invest more in automation technology to drive more efficiencies across businesses.

''The whole evolution of technology is happening very fast. If you take the digital space, the five forces - mobile, cloud, social, big data, analytics - are having a significant impact on businesses irrespective of the industries they operate. Every business around the world is going to adopt these technologies. There is going to be technology play in everything, whether it is in a car, manufacturing plant or retail operations. So, adoption of the digital technology is a big opportunity, an additional $3-5 billion for TCS alone in terms of market opportunity,'' he told sections of the media.

''The second area that every company is trying to address is to simplify their IT investment, so that they optimise on one side, while, at the same time, remain futuristic. It is not just about cutting costs. Companies are looking to get some benefit from technology and operations by taking a relook at various investments,'' Chandrashekharan said.

He iterated that the company would perform even better during the 2014-15 fiscal year, but said that uncertainty in the Indian market due to upcoming general elections would slow revenue growth in domestic revenues for TCS.

''It's an election year, there will be delays in decision making, so it's only prudent that you don't expect too much growth. So we've said we expected muted growth from India,'' he said.

TCS sees the digital space as a multi-billion dollar opportunity. ''Customers across the board are ramping up digital. We are seeing adoption of digital by every company, across every industry, in every market. The size of deals is increasing from a few hundred thousand dollars to about a million dollars,'' Chandrasekaran added.

''If we go back in time, we realise that the agricultural and industrial economies in the last 50-60 years got transformed through the information age. The next big thing is the digital consumer economy, which is a big jump from the industrial economy. This is because every business is getting connected to the consumer. Now, a product is launched and feedback is available on the social media immediately,'' he further said.

For the 2014-15 financial year, Nasscom has forecast a 13-15 per cent revenue growth for software exports, its highest forecast in three years, as discretionary spending from top clients is expected to increase. For the domestic market, however, Nasscom predicted slower than expected growth due to uncertainty in decision-making in government projects because of the national election that's due by May. (See: Nasscom ups guidance on global cues, but India to remain weak).

''On automation, we have invested in building software, tools and technology that can automate many of the areas that we are looking at. And we need to pilot that, we need to work with customers, so we will play in that space as well,'' Chandrasekaran said.

TCS, which employs well over 250,000 people and increasing, will continue with its strategy of focusing on the bread-and-butter outsourcing business, where revenue growth is linked to manpower addition. TCS plans to recruit at least 55,000 employees in 2014-15.

''There will be no artificial attempt to not do the current model. The current model has very strong traction and we need people and we need a lot of talent, but the skill sets will be different. So how do we invest in training, how do we recruit the right people - all those things have become very important. On the other hand we will be ready for the future,'' Chandrasekaran said.