More reports on: In the news, M&A, Aircel

Charges will be filed in Aircel-Maxis case: Jaitley

With new charges against former cabinet minister P Chidambaram's son Karti surfacing over the Aircel-Maxis deal, the government on Wednesday asserted in the Lok Sabha that there were ''no holy cows'' and action would be taken against those found guilty, ''howsoever important'' they may be. 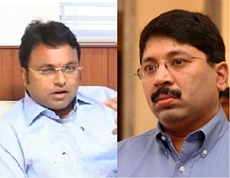 Finance minister Arun Jaitley said that the Enforcement Directorate and the investigative wing of the Income Tax Department, during recent searches in connection with the Aircel-Maxis deal, have recovered several ''incriminating'' documents which are being scrutinised and charge-sheets will be filed.

Replying to a short duration discussion on Aircel-Maxis deal in the wake of vociferous demand for action by the AIADMK which has been disrupting the House over the issue since Tuesday, Jaitley said the matter is being probed by three investigating agencies and it would be taken to the logical conclusion.

''No one will be spared. We have no holy cows to protect. The government is going to the root of each one of these cases,'' said Jaitley, who also holds the corporate affairs portfolio.

Refuting allegations that the government was going slow in the 2G and Aircel-Maxis cases as ''absolutely incorrect'', he said in all these cases, ''where CBI has come to a prima facie opinion that an offence has been committed, charge-sheets have been filed and the trials are going on''.

Jaitley said, ''Whatever was the stand of the earlier government, we have not been influenced by that stand at all. The investigative agencies have absolute freedom to professionally record the entire evidence and if they come to an opinion that some people prima facie guilty, the investigating agencies are free to take actions.''

For the second day on Tuesday, Parliament proceedings were been disrupted by the AIADMK members who were demanding action against Karti Chidambaram following reports that he has invested huge sums of money in various countries based on searches conducted at his premises and other related companies.

Jaitley said the government is completely committed to absolute probity.

:It all started with the infamous 2G case. Then, the extension of the case ... led to the Aircel-Maxis issue which has now further led to a third category of cases,'' the finance minister said.

Responding to queries by certain members on whether FIR have been filed in these cases, he said under the law, there is no need to file FIR and only charge-sheets are filed once the investigations are completed.

''All I can say is that whatever action has to be taken under the law, under different provisions, once the violation is detected, investigations will be taken to their logical conclusion,'' he said.

''All facts, including facts in relation to certain entities which have been named, I am not consciously using those names because these matters are under investigation,''. Jaitley noted.

Jaitley said on 8 January 2016, a charge sheet and a compliant has been filed in court by the ED and on 27 February, the court took cognisance of that charge sheet.

''Notices have gone to the various accused who will now be tried in the Aircel-Maxis case and they will have to face trial and (it is) eventually for the court now to decide,'' the minister said.

According to him, a ''lot of incriminating'' material has been seized and details of assets held by certain entities in India and abroad have also been obtained.

''Pursuant to that entire information, witnesses are being recorded, those documents are being analysed, letters Rogatory have been sent by the ED to several countries,'' he noted.

In these cases, he said the three Acts involved are related to Income Tax, Foreign Exchange Management Act (FEMA), and Prevention of Money Laundering (PMLA).

Jaitley said in the course of investigations, a series of raids were conducted by the Income Tax department and the ED against several companies, more particularly in Chennai. This was followed up by raids against other companies also, he added.

''I must straightaway at this stage place a particular limitation on myself and that limitation is on account of two factors. There is a provision in the Income Tax Act, as also in the PMLA, under which I cannot make public the details of the investigation.

''Secondly based on another very important principle that if investigations are at a crucial stage, and third set of cases has reached a very critical stage, then disclosure of that investigation material publicly may actually prejudice the investigation.

''So I am therefore both in law and at the matter of propriety constrained from placing the details of those investigations,'' Jaitley noted.