Criticising social networking giant Facebook's ambitious 'free internet' plans, Sunil Mittal, who heads Indian telecom leader Bharti Airtel, suggested on Sunday that it would be tantamount to ''philanthropy'' if they stop charging for mobile internet, indicating that he did not find it a viable model. 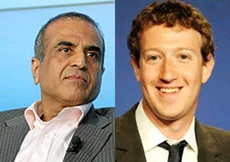 Facebook has launched an 'internet.org' initiative under which users can access internet free of charge for select websites if they come through a partner telecom operator.

Mittal's own Airtel Africa is one such partner for Facebook; another is rival Reliance Communications controlled by Anil Ambaini, which has partnered Facebook in India for this initiative.

It is based on assumption that bringing more people to the internet fold by offering them free service initially is good for the industry.

Mittal, who met Facebook founder and chief executive Mark Zuckerberg in at the Mobile World Congress in Barcelona, Spain, said that Zuckerberg is right in its thinking that such a move would expand the market, but telecom operators also need to get revenues.

"I told him (Zuckerberg) that you are right that this (internet.org) expands the market. At the end, you must understand that we (telecom operators) need to charge you for something. SMSes have gone more or less, voice is going down and they (Facebook) recognise that," Mittal said in a media interaction.

"If you are going to make the data free, then let's do completely philanthropic projects. The government must make spectrum free, there should be free network, but it is not happening."

The billionaire entrepreneur, who (like most of the big Indian business houses) has his fingers in several pies, said telecom companies were as a whole not making big money.

The comments come at a time when a high-pitched auction is under way in India for spectrum.

Telecom companies say they invest billions of dollars in spectrum, network and other operations, but they argue that internet-based entities offering pseudo-telecom services are piggy-backing on the mobile operators' networks without bearing much investments on their own.

At the same event here, UK-based telecom giant Vodafone's global CEO Vittorio Colao reportedly said about Facebook's free-of-cost internet plan that "it is almost like Zuckerberg does philanthropy, but with my money."

Mittal cautioned that investments in mobile networks by industry will go down as Internet-based messaging and calling services are 'cannibalising' revenues of telecom firms.

"He (Zuckerberg) is saying that make Internet.org a 'lite' version of Facebook free of data charge, so that people will upgrade. People will come to internet for the first time. The point is that it is self-serving for them," Mittal said.

Telecom operators have been facing pressure on their financials from the emergence of a number of Over-The-Top (OTT) firms like Facebook (through its WhatsApp messaging service), Skype and Viber, which on their part claim to be helping telecom operators grow business.

"We (telecom operators, social media and over-the-top players) are good for each other but they, regulators and politicians must understand that networks' investment must be on reasonable terms. Gone are the days when telecom companies were making large amounts of money," Mittal said.

"OTT players must understand pains of the mobile industry. Sometimes we are seeing as gatekeeper, bad guys. The fact of matter is spectrum - there is cost, network there is cost and tariff has gone up by only 3 paise in last three years," he added.

In December, Airtel had announced separate charges for internet-based calling services but withdrew it after an outcry on social media.