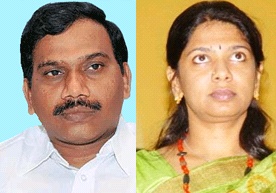 The charges were filed in the court of special CBI judge O P Saini in Delhi through special public prosecutor Naveen Kumar Matta.

The charge-sheet has also names nine companies under various provisions of the Prevention of Money Laundering Act, 2002.

If convicted, the accused are liable to imprisonment of at least three years and a maximum of seven years. They can also be directed to pay fines of up to Rs5 lakh.

The accused have been booked under various sections dealing with the Prevention of Money Laundering Act. The court will consider whether to take cognisance of the charges on 30 April.

The ED claimed it had proof that the accused were involved in a money laundering scheme, whereby the Swan promoters paid Rs200 crore to DMK-run Kalaignar TV using their group entity Dynamix Realty.

Karunanidhi's wife is a 60-per cent stake-holder in KTV, while Kanimozhi owns 20 per cent.

The payment was meant as gratification to Raja and his associates in return for illegal favours given to STPL for the grant of the unified access services license. However, in an effort to hide it under the garb of a loan, the money was given along with an additional amount of Rs. 23.55 crore, the enforcement directorate added.

This projection of tainted funds as clean was done by the accused in two parts, the ED claimed. First, the money flowed from Dynamix Realty to KTV and subsequently returned from the latter to the former. This structuring of funds for layering of illegal gratification falls squarely within the purview of the Prevention of Money Laundering Act, the charge sheet said.

Charge-sheeted by the CBI in 2011, Raja, Kanimozhi and other accused are already facing trial in the 2G scam case. Raja and Kanimozhi were earlier questioned by CBI in the case.