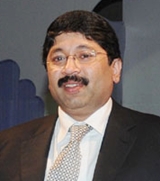 Special CBI Judge O P Saini dismissed the petition and instead ordered petitioner Vivek Garg, an RTI activist, to pay cost of Rs20,000, saying he had filed the application to "seek cheap publicity and to waste the time of the court."

In his petition, Garg had sought a direction to the CBI to file a status report on its investigation into the 2G scam till date and the report filed against Maran in the case.

The petitioner also sought a court directive to the CBI to file an affidavit as to whether the documents on the basis of which an FIR was lodged against Maran and those he had filed along with his application were the same.

He also wanted the court to direct fresh or separate filing of FIR against Manmohan Singh, Maran and others in case the contents of the CBI's FIR differ from those of his complaint.

"In view of the reasons stated above, I am satisfied that the applicant is not in possession of any evidence at all, but has filed the instant application against Prime Minister Dr Manmohan Singh, Dayanidhi Maran and others in order to seek cheap publicity and to waste time of the court," the judge said and directed Garg to deposit Rs20,000 as cost within seven days.

Garg had earlier approached another Delhi court with the complaint but the judge declined to heat it since it pertained to 2G spectrum scam and there was a special 2G court to hear all related cases.