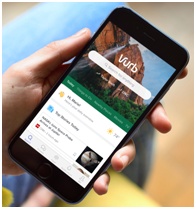 Founded in 2011 by Bobby Lo, San Francisco-based Vurb launched as an app for iPhones in 2015 and later to Android and Amazon devices.

The app allows users to search and discover what's around them, such as restaurants, movies or other events, and also share them with friends.

This card-based contextual search engine functionality removes the need to switch through multiple other applications on the device to perform a task.

TechCrunch said that it is not clear exactly what Vurb will do at Snapchat, but helping users make plans with friends is one possibility. Vurb could build upon Snapchat's existing feature that automatically turns addresses into map links.