With cumulative installed wind power generation capacity of 28,279 MW, India has emerged the fourth-largest wind power producer in the world, after China, USA and Germany. 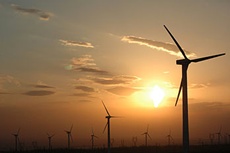 A capacity addition of 0.53 GW has been achieved under Grid Connected Renewable Power since last two and half years from small hydro power plants.

Biomass power includes installations from biomass combustion, biomass gasification and bagasse co-generation. During 2016-17, against a target of 400 MW, 51 MW installations of biomass power plants have been achieved making a cumulative achievement to 4,882 MW.

Family type biogas plants, mainly for rural and semi-urban households, are set up under the National Biogas and Manure Management Programme (NBMMP). During 2016-17, against a target of 1.00 lakh biogas plants, 0.26 lakh biogas plant installations have been achieved, making a cumulative achievement to 4.94 million biogas plants as of 31 October 2016.

A capacity addition of 14.30 GW of renewable energy has been reported during the last two-and-a-half years under grid-connected renewable power, which include 5.8 GW from solar power, 7.04 GW from wind power, 0.53 from small hydro power and 0.93 from bio-power.

The government in its submission to the United Nations Frame Work Convention on Climate Change on Intended Nationally Determined Contribution (INDC) has stated that India will achieve 40 per cent cumulative electric power capacity from non-fossil fuel based energy resources by 2030 with the help of transfer of technology and low cost international finance, including from Green Climate Fund.

As of 31 October 2016, solar energy projects with an aggregate capacity of over 8727.62 MW has been installed in the country.

Solar tariffs have also fallen to an unprecedented low of Rs4.34 per kWh through reverse auction for one of six projects of 70 MW each to be put up in Rajasthan under the National Solar Mission.

NTPC on 18 January 2016 conducted the reverse bidding for 420 MW solar power projects  However, the  tariff had further fallen to Rs3 per unit, which was quoted by Amplus Energy Solutions in an auction for rooftop solar power conducted by Solar Energy Corporation of India (SECI).