India and Japan today signed a landmark civil nuclear agreement, six years after India and the United States signed a similar agreement to facilitate nuclear power generation in India on a larger scale. 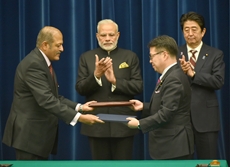 The agreement was signed in Tokyo after Indian Prime Minister Narendra Modi who is on a three-day visit to Japan and his Japanese counterpart Shinzo Abe held talks. The two countries signed about 12 agreements, including the civil nuclear agreement after the two leaders met for the annual summit.

The agreement, which will allow Japan to supply nuclear reactors, fuel and technology to India, will allow US-based Japanese nuclear reactor and equipment  suppliers such as Westinghouse and General Electric to do business with India.

"The Agreement for Cooperation in Peaceful Uses of Nuclear Energy marks a historic step in our engagement to build a clean energy partnership," said PM Modi.

The two countries had reached a broad agreement last December during Japanese prime minister Abe's visit to India, but political and moral resistance within the country, especially since Japan has suffered a nuclear attack and the nuclear disaster of 2011 at the Fukushima Nuclear Power Plant, held up a deal.

Although India has not signed a non-proliferation treaty, contending that the NPT is discriminatory and also because it has two nuclear-armed neighbours – China and Pakistan – on two sides to reckon with, the country has declared a moratorium on nuclear testing since its last explosions in 1998.

A treaty with Japan is also necessary to facilitate the India's proposed acquisition of six nuclear reactors to be located in Andhra Pradesh. India is in advanced negotiations with Westinghouse Electric, owned by Japan's Toshiba, as part of New Delhi's plan to ramp up nuclear capacity ten-fold by 2032.

Modi, who landed in Tokyo last night, held an audience with Japanese Emperor Akihito this morning. He also addressed top Japanese CEOs to seek investments in the country, which he said, wanted to be the world's most open economy.

Japan is in an intense competition with its bigger neighbour, China, to clinch high-speed train (bullet train) deals with India after it lost out to China on a similar deal with Indonesia last year, and is set for a face-off again over a proposed Singapore-Kuala Lumpur link

From Tokyo, PM Modi, accompanied by Shinzo Abe, will travel to Kobe by the famed Shinkansen bullet train, the technology that will be deployed for the Mumbai-Ahmedabad High Speed Railway. He will visit the Kawasaki Heavy Industries facility in Kobe, where high speed railway is manufactured.

Modi and Abe held wide-ranging talks on Friday aimed at giving a fillip to the bilateral strategic relations. This is the Prime Minister's second visit to the country in two years.