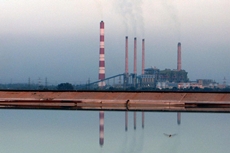 BIFPCL on Tuesday inked a deal with Bharat Heavy Electricals Limited (BHEL), which was selected under an open international tender for constructing the super thermal plant at Bangladesh's southwestern Rampal near the Sundarbans.

India's Exim Bank will provide $1.49 billion for the project, scheduled to start generating power in 2019.

"This ceremony marks the beginning of the biggest project under Bangladesh-India cooperation," state minister for energy and power Nasrul Hamid said.

Environmental groups had opposed the project amid concerns that the coal-fired plant could affect the delicate ecosystem of the Sundarbans, the world's largest mangrove forest, spread across Bangladesh and India.

Speaking at a function to mark the signing of the agreement, Bangladesh Prime Minister Sheikh Hasina, her energy affairs adviser Toufiq-e-Elahi Chowdhury and her principal secretary Abul Kalam Azad allayed environmentalists' fears saying that the power project will use the world's most efficient and environment- friendly technology.

"We have a coal-powered plant at (northwestern) Barapukuria in a crowded location which is not affecting the environment while the technology being used for the Rampal plant is far more modern and most environment friendly (than that of Barapukuria)," Azad said.

"We respect the concern of the people of Bangladesh, we are set to maintain the maximum environmental standards for the plant," BIFPCL managing director Ujjwal Kanti Bhattacharya said.

Bangladesh had fast tracked the project, which is also known as Maitree Super Thermal Power Project, which was started under a bilateral agreement signed during Prime Minister Sheikh Hasina's India visit in 2010.